The clubhouse on Sloane’s Beach was built by the Richmond Cruising Club (now Richmond Yacht Club) in 1913, with the second story added in 1937. 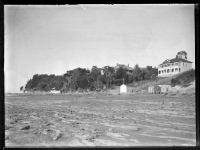 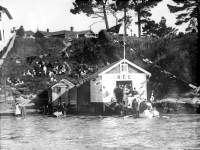 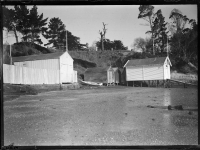 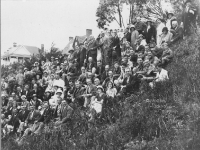 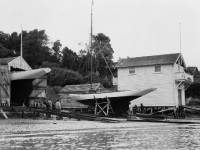 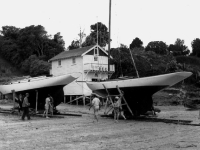 [The Richmond Cruising Club] started simply as a group of young yachtsmen centred about the boatshed of James Donald at 38 Rawene Ave, on Cox’s Bay. This area was then part of the suburb of Richmond, a name now totally superseded by Westmere in the west and Posonby in the east. Reliable evidence puts the start of this informal group at 1903. The members cruised together, and held races in their bay. …

At Richmond’s 1909 Annual General Meeting, W.J. Holdsworth in the chair looked back at the young club’s history and talked about its “phenomenal growth”. He said that in 1906 there were only seven members, while now there were 106.

Richmond tried for many years to build a clubhouse on Sloane’s Beach, announcing its intentions as early as 1908. The saga is set out in the New Zealand Yachtsman of 19th July 1913,

Some interesting particulars concerning the Richmond Cruising Club’s new clubhouse at Sloane’s Beach were given by the  president, Mr W.J. Holdsworth, at the annual social and  distribution of prizes on Thursday week.

Five years ago, said Mr. Holdsworth, the club applied to the  Auckland City Council for a permit to erect a clubhouse on  Sloane’s Beach, and after a lot of trouble the request was granted. At that time there were already three private sheds on the beach, and when the club made application to the Auckland Harbour  Board in the usual way for a site, the Board refused to grant it.  Matters were then brought to a standstill, and no further progress was made until a year or two later. The club, however, was not to be denied, and decided to make a fresh application to the City Council, as some years had elapsed since the first permit had been granted. Mr. Holdsworth was appointed to wait on the Council to support the application, which was granted on the understanding that the club paid a fee of 1/. per year as rent. This, of course, the club willingly decided to do, and being fortunate in possessing no less than five carpenters in its ranks, ordered the timber for the shed and set to work. There was now much rejoicing on the part of the members, and it looked as if the club were at last going to have a clubhouse. The foundation was laid, and the frames put into position. Some private individuals, however, got busy and, of course, objected to the Richmond Club having a pavilion, resulting in the club receiving word from the City Council to discontinue building operations. The club then endeavoured to arrange with the private owners to consent to the erection of the shed, which they refused to do, although they themselves owned sheds on the beach. The Commodore (Mr. T.L. Thompson) and Mr. Holdsworth then waited on the Harbour Board and suggested that the Board should grant the club the necessary permit if they removed the building further seaward. This the Board agreed to, and all hands got to work and pulled the partly erected shed down and made a fresh start on the new site. Their troubles, however, were not ended. They had not long been left unmolested when a letter came along from the Board, requesting the club to again cease building operations. The club next sought the assistance of Mr. J.H. Bradney, M.P. for Auckland West, who discovered that the Board had no jurisdiction in the matter. A letter was next sent to the Marine Department, who, it was found, was the proper authority to deal with. No further progress was made, however, until the Hon. F.M.B. Fisher, Minister for Marine, visited Auckland some few months ago. A deputation consisting of Messrs Bradney, Thompson and Holdsworth secured an interview with the minister, and after placing the whole position before him, motored out to Sloane’s Beach and inspected the site. Mr. Fisher then expressed the opinion that the private sheds had no right to be there, and promised to do what he could for the Richmond Club, After waiting for some time, word was received from the Marine Department stating that it had no objection to the clubhouse being erected on the proposed site, and allowed the club to finish its pavilion. Another start was then made, and there being no more difficulties to overcome, the members at last succeeded in completing the clubhouse, which they have now every reason to be proud of. There is just another. little matter concerning the clubhouse, concluded Mr. Holdsworth, and that is that although the Harbour Board refused to allow us to erect our pavilion, they actually sent us an account for Li is for rent, which we paid. I am glad to say, however, when we discovered that the Harbour Board had no jurisdiction in the matter, we made application for the refund of our guinea, which we duly received.

The new clubhouse is 25ft x i8ft, and has skids 22ft long leading from the front of the building. It is one story high, and is built after the bungalow type of house. The interior of the building is not yet quite complete, but all the necessary work will be carried out before next season.

The Club Patron, the Hon Ceo Fowlds, opened it on 8th of November 1913, with between 150 and 200 guests present. Mr. Bradney, who was presented with a “handsome gift” for his efforts with the Minister of Marine, said,

I consider it my duty to do all in my powers on behalf of such a healthy recreation as yachting and will, at any future time, be only too pleased to do what I can to assist the club and the sport generally.

As a fitting conclusion to a most successful afternoon numerous guests were taken for a spin in the following yachts; Emerald, Countess, Mowai, Varuna, Wairangi and others. Mr. Frank Chalmers also kindly placed his fine launch Gwen C. at the disposal of the committee…

Apart from Countess, an 18 footer owned by Clark, Saunders and Porteous, the rest of the boats mentioned were all mulleties, Emerald and Varuna 26 footers owned by Bater and Cross and N. Craig respectively, the other two 22 footers, Mowai owned by T.P. Boswell and Wairangi by G. Keen. This little fleet summarized the type of yachts with which Richmond saw its destiny.

At the 1927 AGM, Cook reported that the Minister of Marine had renewed their lease of the Sloane’s Beach site for a further 14 years at the same rent of £1 per annum.

During June 1932 an “Art Union” or raffle was held, run by Ivo Dennes. This raised the huge sum, for those Depression times, of £222/12/- that was immediately earmarked for extensions to the clubhouse. By 19th July plans had been prepared for a second storey, the matter discussed with the Marine Department, and quotes obtained. All timber was bought from Leyland O’Brien at a 10% discount and construction work was offered to unemployed members first, at 12/- a day. Supervised by Mr. Francis and with E. Saunders as foreman, work started on 26th July and was soon completed.

Gordon “Boy” Bellve made a superb front door key for the revamped clubrooms and presented a cup for racing in the l8ft V Class, while James Donald presented the Club with a handsome clock for the clubhouse.

By now [1935], the clubhouse was in heavy use for the weekly and monthly meetings, sub-committee meetings, ladies meetings, card evenings and minor social events.

Richmond’s most pressing problem during this time was the Ponsonby Wharf, which the Club had used for starting races for 25 years and which was now scheduled for demolition, possibly even before their Annual Regatta in February 1936.

Most of the Waitemata clubs put on a flagship for their prestige annual regattas where dignitaries from visiting clubs and other V.I.P’s could congregate, eat, drink and watch the day’s racing. Boy Bellve … volunteered his 37ft Sam Ford launch Cyrena as both starting boat and flagship. This arrangement worked so well that, when the Ponsonby Wharf did get demolished in the winter of 1936, Richmond’s starts were thereafter off Cyrena, giving a lot more flexibility in courses. Frankhams [of 39 Marine Pde] provided the flagship for subsequent Richmond Regattas, Coronation in 1937, Motiti in 1938 and Awanui in 1939 (although she was replaced at the last minute by the Georges’ Will Watch).

Over the next couple of years, Richmond’s popularity with its members, other clubs and the AYMBA “establishment” was very high. It was seen as a friendly, modern and pro-active club.

The 1938 Richmond Regatta was a huge success. The New Zealand Herald devoted half a column to listing the record 121 entries, ranging from six 26ft mullet boats down to seven 7ft Taurangas (later P Class) from the Air Force Base at Hobsonville.

… at a Special General Meeting on 2nd August 1939, Boy Bellve proposed that the name of the club be changed to the Richmond Yacht Club (Incorporated), which was passed and the name was used from September 1939 onwards.

In early 1940, a Ladies Committee was set up in anticipation of the opening of the new clubhouse [at Westhaven] and to assist with fund raising and war work. The Committee was extremely active with card evenings and catering for Club nights. … Meetings were originally in the ladies’ homes, then in the clubhouse at Sloane’s Beach, but they had their first meeting in the new clubhouse on the breakwater on 2nd October 1940, six weeks before its official Opening Ceremony on 14th November 1940.

Gypsy and Waione:   Our gallery features images from 1939 of the K-class boats Gypsy and Waione on Sloanes Beach, with another image showing Gypsy in the adjacent boathouse at the 33 Marine Parade. The last owner of Gypsy, John Pryor, has revealed that she was owned by the son of Mr Leyland, owner of 33 Marine Parade; this explains her use of 33’s boatshed. Waione’s connection with Sloane’s Beach is not known by her owner. Waione is still sailing at the time of writing. Gypsy was still sailing until Feb 1 2012, when she was sunk in a collision during the Auckland Anniversary Regatta. An NZ Herald article notes that “Kawau Island resident John Pryor spent five years and $100,000 restoring his 71-year-old classic yacht Gypsy, only to see her smashed to pieces and sunk in a collision. … Mr Pryor said he and Ms Hetherington had raced the 1939-designed Gypsy – the last full-size design by Arch Logan – with success in several regattas this season.” These comments suggest our photo was taken shortly after Gypsy’s launch. In an email, John Pryor notes “You will notice that she currently has a dog house which I believe was added some time in the forties not long after she was built. I believe she was built at Northcote by Bill Couldrey and was commissioned by Alan Leyland. She has been called by a number of names. Gypsy in most publications and on the bronze name plates, Gypsie on the rudder stock and various other variations in the Auckland museum records.” See also http://gypsy.org.nz/